Growing up With D&D

Thinking about my history of gaming after listening to Trying to Be Kind (Season 2, Episode 2), especially a bit Fiona put forward about learning the game in the early days of D&D. As related in another post, I started playing with friends the year it came out and we developed our own interpretations and play styles in response to the loose system presented in the three books.
However, it wasn't too long before we began joining other games, with older players, both college students in Urbana, Illinois, and older gamers, early adopters, friends of TSR, college professors, etc. It was at once an intoxicating scene for it's interest in the games we played, and to be in that orbit was amazing! But it was also one where we were marked outsiders: young and, more critically, playing The Game in what was clearly becoming a non standard way. We were outsiders, not on the mailing list, too young to attend any conventions, to drive, to fully engage in the expected ways.
So, the OSR, whatever it is, is, in some ways, referencing a conversation or frame we were two steps away from. We played all the games, voraciously, but rejected, in many ways, those that pushed us and our playstyles aside. We moved quickly towards punk and anarchy in an era of massive RPG growth. All those convention goers and box set purchasers of the late '70s and early '80s were symbolic of capitalism's worst excesses and seemingly a betrayal of our game's roots.
Gaming was about taking the slimmest of seeds and constructing an artifice of imagination around it. The premade adventures, the dueling iterations of advanced versus basic, and the artifice of the right way to play, well, that was as alien then as it is now. 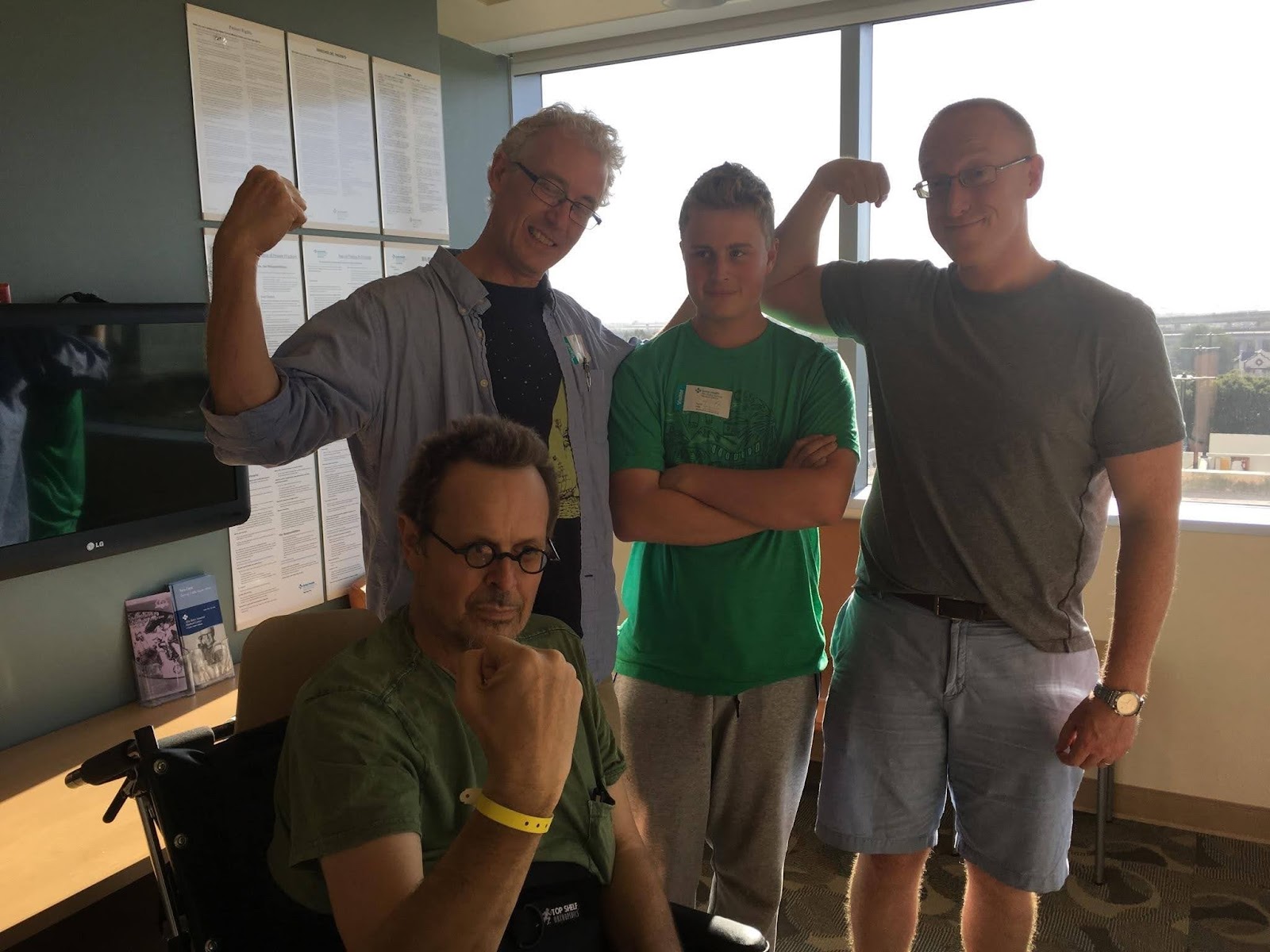 Posted by William C. Purves at 6:04 PM No comments:

With CraftWork out, there are a couple hacks I find helpful when using the procedural character generation sequence. What does a good hack need more than a hack!?!
Mustering Out
I often call a Character done after 5 or 6 levels, even if they aren't. They are full of possibility and personality at that point! There are dice sequences I could use to force this, but it seems unnecessary.
*Wizardry*
Wizards gain casts every level but they memorize spells from a spell book. I suggest waiting until the character rolling is done before filling out the spell book, and putting in 1D4 spells per level attained (eg a level 2 wizard would have 1D4 1st level spells and 1D4 2nd level spells.) I often add 1D4 spells of the next level, just because I want that NPC to be aspiring to something (and if they happen to *cough*cough* lose the spell book then it gives the finder some additional goodies.)
Practices & Circles
StageCraft and SeerCraft both have interior specializations. When a character returns to either one, do they stay with the one they started or do they switch to a new one? As someone who both likes both breath and depth, this can be a hard question! The way the book is set up, you just roll and the luck of the die will take you to new spaces or familiar ones. However, you could also use a different dynamic, say a 1D6 roll with 1 to 3 being stay, and 4 to 6 being switch. Sometimes I will roll straight up and then decide, as if I have been offered a position in the new specialty; what does the growing character want to do? Which feels more authentic to this little fictional person? 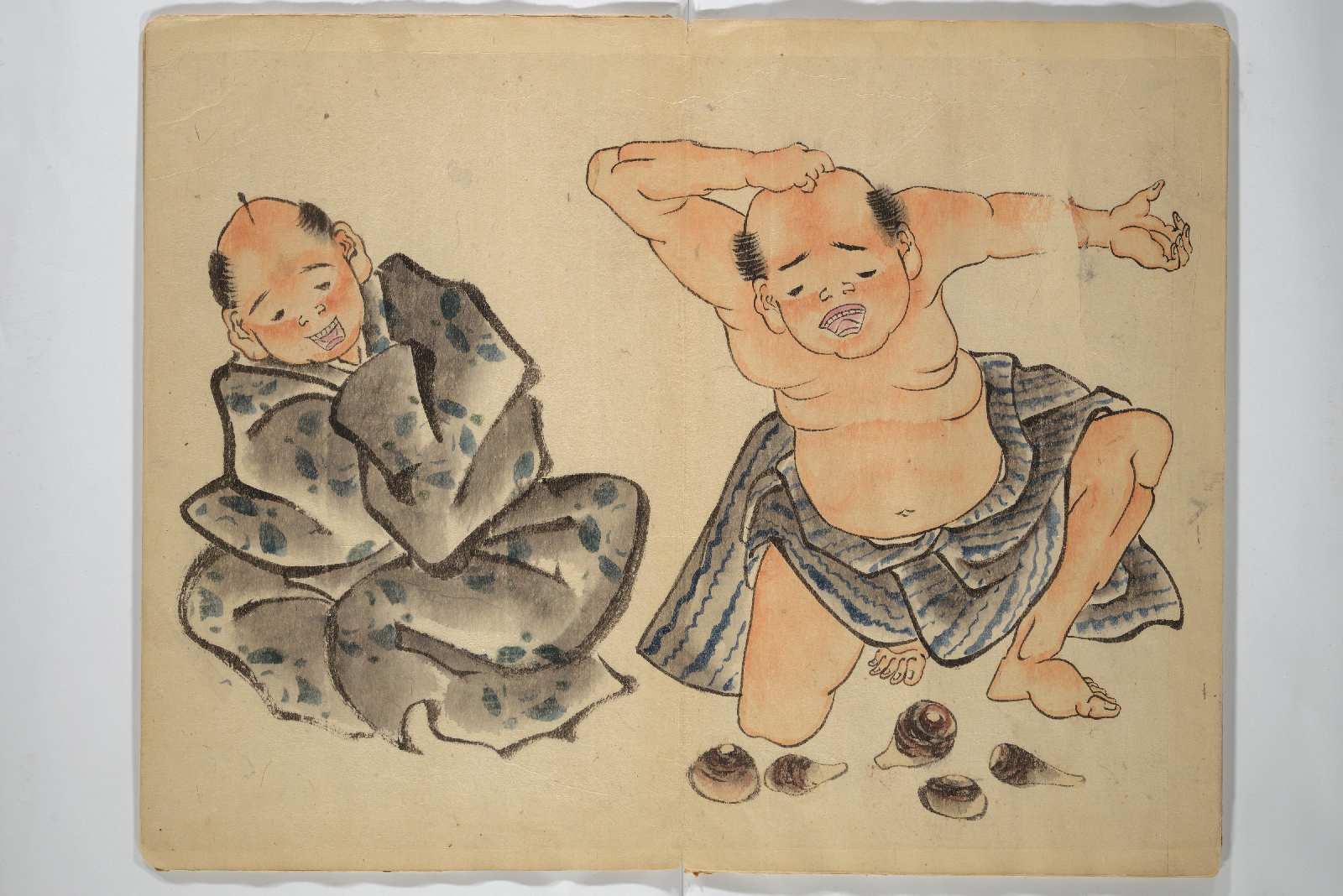 Posted by William C. Purves at 8:49 AM No comments: 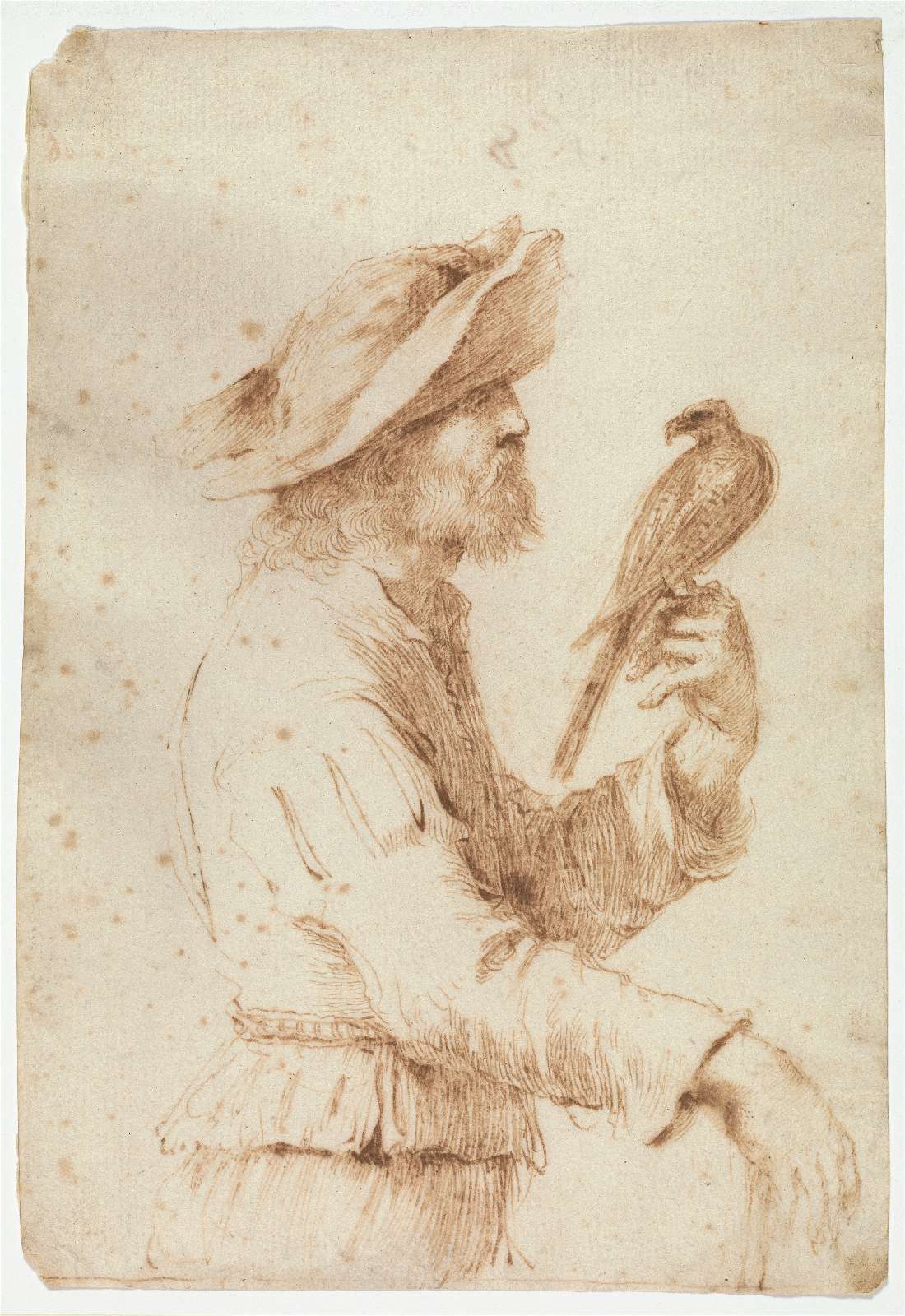 Posted by William C. Purves at 5:53 PM No comments:

At the risk of sending people into a crazed internet infinite loop, here's a link to the CraftWork sale page on Exalted Funeral. I am very excited about the launch, equally excited about how the book looks, and more than excited about next steps and publications. So much to consider: website, development schedules, other projects, more authors, and increased accessibility!
CraftWork purchase page 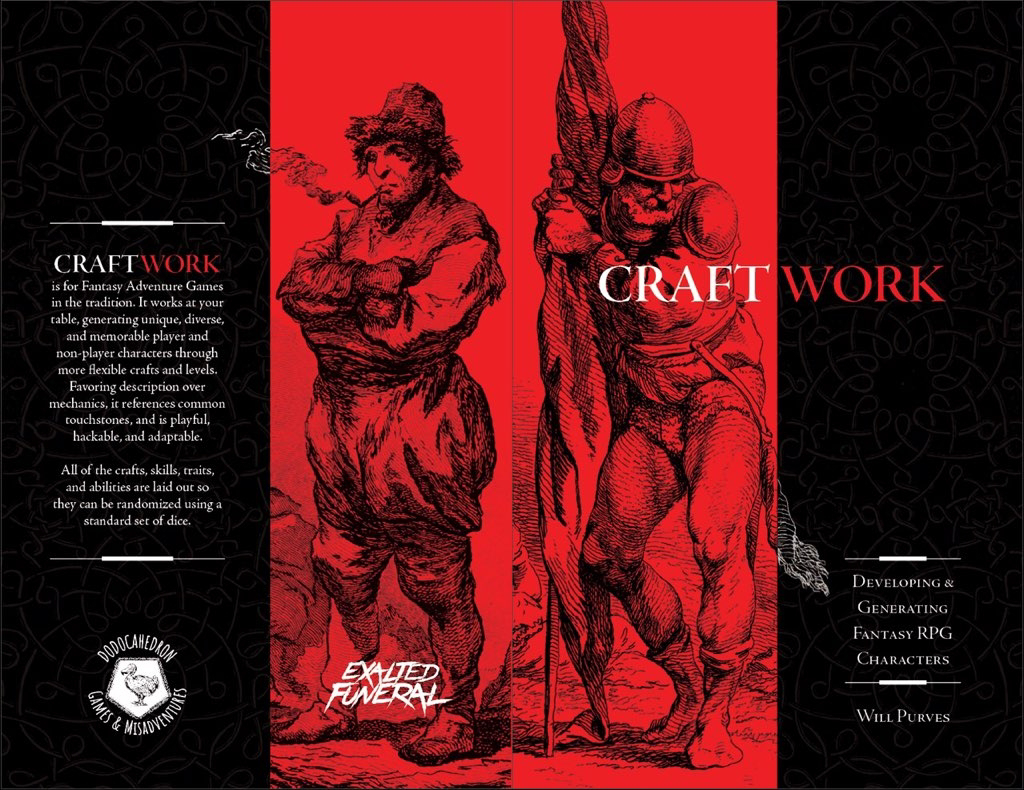 Posted by William C. Purves at 9:03 AM No comments:

So, all this Craft stuff is cool, but I don't really see how it works with the class-based save system in my game. If I am a third level Fighter, then that dictates my saves. How does that work if I have two levels of fighter and one level of thief, for example?
Solution #1
Use the total number of levels in your predominant craft to determine your save chart. Your save chart will switch around as you progress, but probably not as much as you might think, generally once or twice over the course of a character's life.
Solution #2
Use the save chart that you started with as a class and continue using that one, referencing total levels, all the way through your Character's career. You could say that this represents natural tendencies, or you could rationalize by looking at the total number of saves you'll actually take throughout the characters life. The percentage difference is not high.
Okay, so then I should probably start off with the best chart, because that will give me an advantage. Yeah, you could, and you could optimize your movement through the Crafts to get the best set of skills and the most uses of abilities. That might be kind of fun to work out (It actually IS kind of fun to work out!), but it also is not much fun to play, especially over time. CraftWork is an easy system to exploit from this perspective, but at the end of the day it is built to develop characters not caricatures. 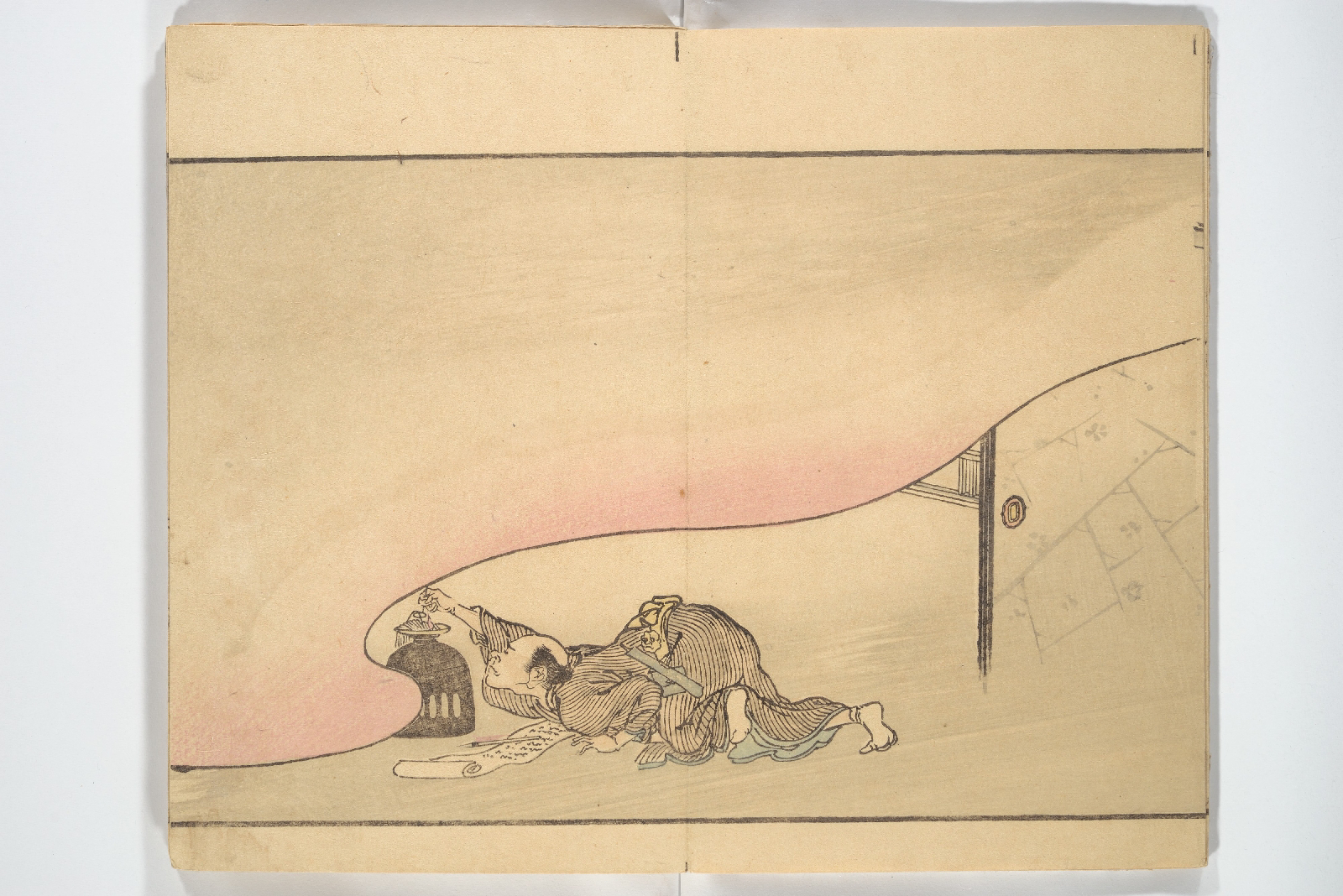 Posted by William C. Purves at 6:17 PM No comments:

One Potential Introduction to The Dim

The Dim is what I call my campaign world and reflects how I like to play. It is multiple times in the history of a particular place.

It is an evolving history and story of a place which bends and weaves with the players actions.

It is a setting where players and characters are on an equal footing with regard to their knowledge of the world. Too often it seems players are expected to know what their characters know, and inhabiting a character feels like skin that is too loose, with too much space between you as the player and the character you are playing. With the players as strangers, travelers, released prisoners, or such, there is little reason for them to know much about the world, and much reason to wonder about the things they encounter. The players and the characters are building a knowledge of the world and building the world along with me and along with each other.

It is a campaign, but it is not scripted, and the maps and writings produced are not fiat. They are possibilities. By creating a world, I create a set of possibilities, a loom, on which everything is woven at the table. 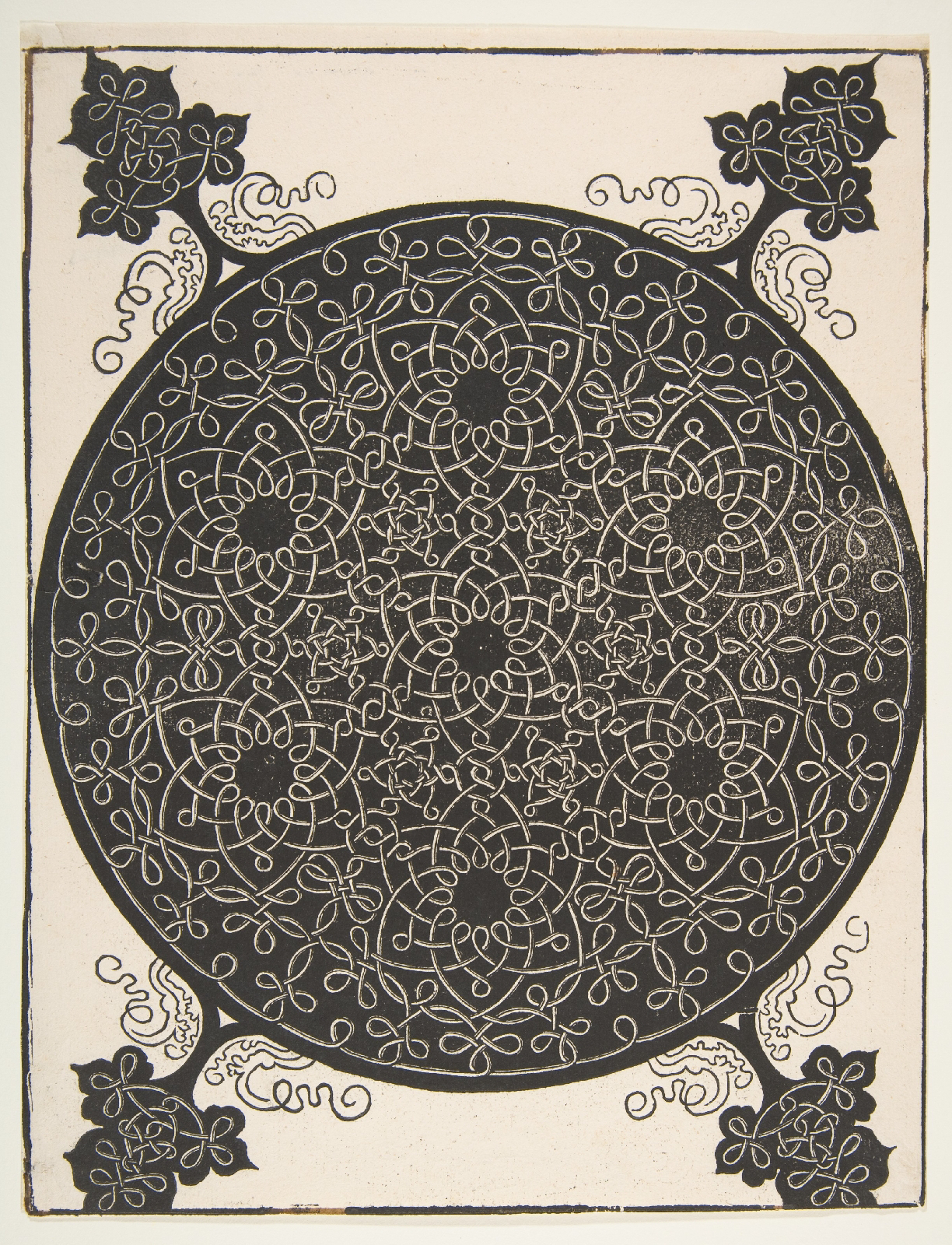 Posted by William C. Purves at 7:31 PM No comments:

So, a cleric, two thieves, and a wizard walk out of a bar, having completed a scourging of the ghosts that were leaking into the back room. Proud of their accomplishments and with their purses a little heavier, they're ready to level up!
What do they do? The cleric decides to stick with SoulCraft, and chooses a blessing to help with healing, as that was sorely lacking in their first adventure. One thief was the first to touch in ancient book in the decrepit subterranean chapel, and this encounter precipitated an awareness of necrotic magic, otherwise known as moving into MageCraft-Sorcery. The second thief, enamored of the clerics leadership and the power of his cult in this port city, decides to pledge his allegiance as well, and chooses a path of righteousness, armed with a powerful holy cudgel. The wizard, having appropriated the ancient book, adds a level and deepens their arcane knowledge.
This was a recent turn of events in one of my campaigns, and I thought it was a good illustration of how CraftWork can be used to reflect and build on events of the evolving story we are building together. All of these decisions made sense, and all of them spoke to directions the characters wanted to go. They all provide story hooks, motivation, and direction for character development in the future. It is also fun to see CraftWork in the wild, with players making decisions I never envisioned. 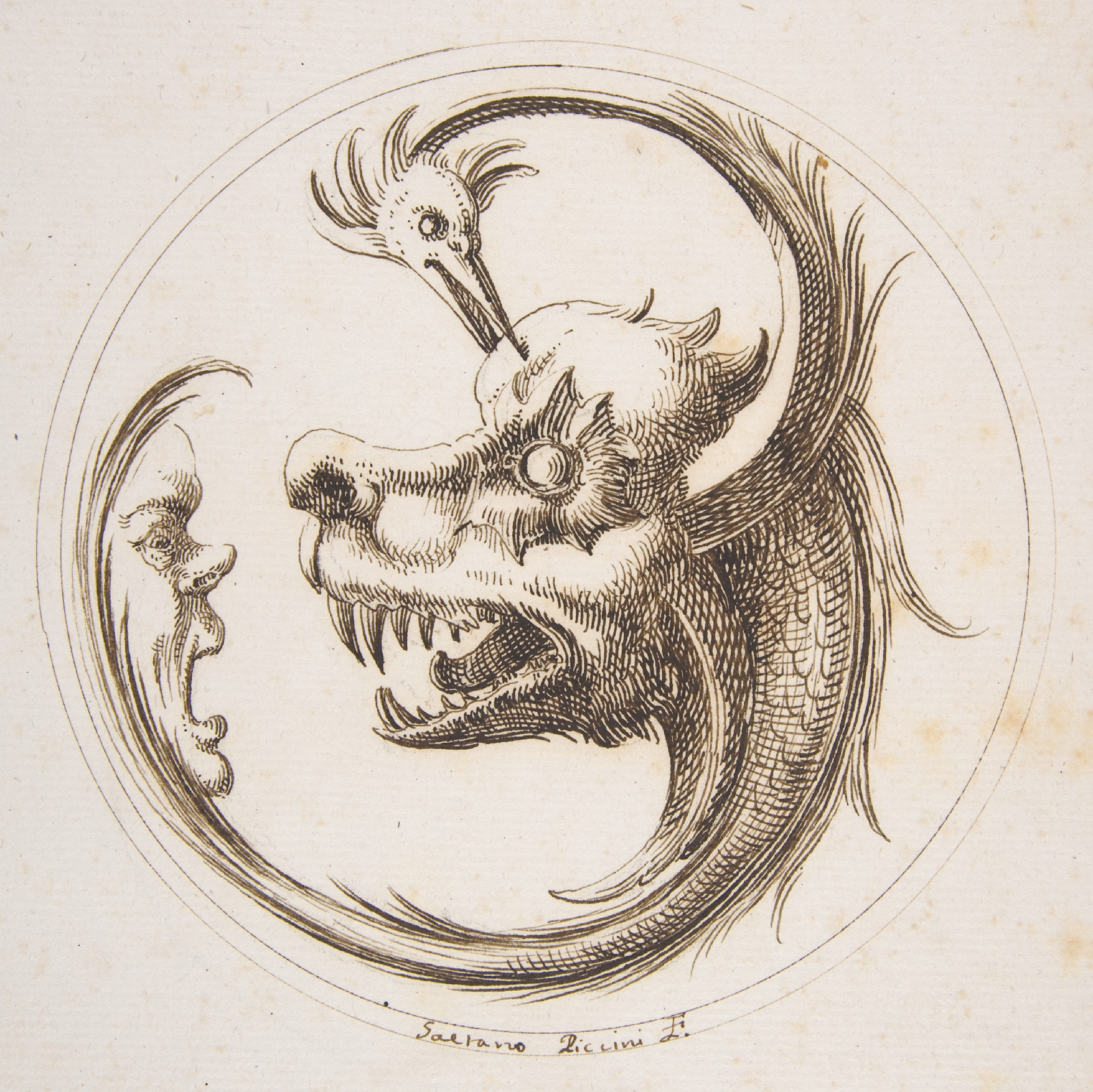